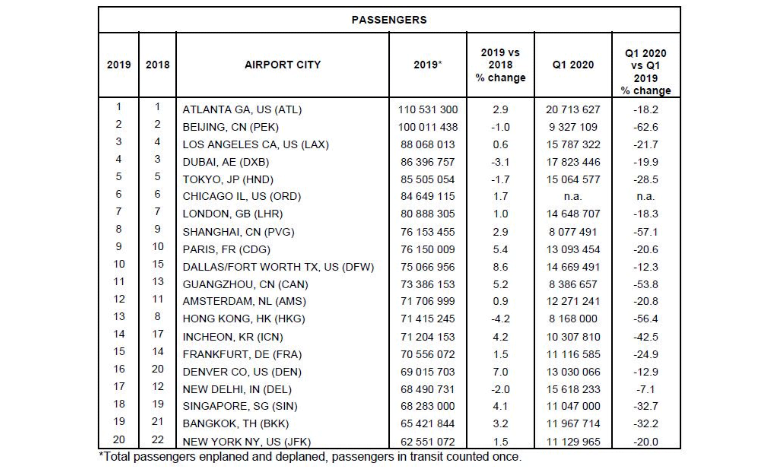 ACI said the combined 2019 and 2020 data shows the dramatic decline in air travel in the first quarter of 2020. In the top five airports, Beijing Airport notably experienced a -62.6 percent  decline in passenger traffic.

“From a period of sustained passenger traffic growth in 2019, the industry is now in survival mode, crippled by the loss of passenger traffic and revenues,” said Angela Gittens, ACI World director general. “This year will pose major and unprecedented challenges for the industry as the impacts of travel restrictions and lockdown measures introduced in response to the pandemic remain an existential threat to the aviation industry unless governments can provide appropriate relief and assistance.”

Cargo fared better in the first quarter, ACI World reported, as air cargo volume experienced a decline of -3.9 percent at the world’s top 20 airports. Hong Kong International Airport (HKG) remains the largest air cargo hub, handling 4.8 million metric tons of cargo in 2019, but it experienced a decline in volume of -6.1 percent compared to 2018.

Chicago O’Hare International Airport (ORD) remained the busiest airport in the world for aircraft movements in 2019, with Atlanta-Hartsfield-Jackson Airport (ATL) coming in a close second. Both saw movements decrease in the first quarter of 2020.