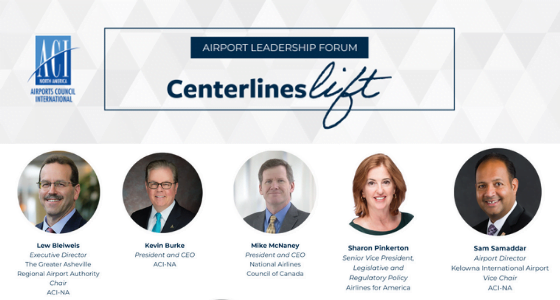 Airports Council International-North America (ACI-NA) has launched a new webinar series called the Airport Leadership Forum, with the first installment, titled “The State of the Airport Industry: Resiliency in an Uncertain World and Finding Our Path Forward,” providing an overview of the state of the industry.

“This has been a historically challenging year for our industry,” said Lew Bleiweis, chair of ACI, noting the massive impact of the COVID-19 pandemic and its impact on travel demand. “These challenges just underscore the importance of resilience in our industry.”

Kevin Burke, president and CEO of ACI-NA, acknowledged that the ongoing struggle to increase traveler demand has come with the challenge of how to connect in a changed world, both within the industry and with travelers. “That process may look a lot different than it did a year ago, but our industry remains indispensable.”

Sam Samaddar, vice chair of ACI-NA and director of Kelowna International Airport (YLW), spoke with Mike McNaney, president and CEO of the National Airlines Council of Canada, to discuss the dire situation in which the Canadian aviation sector finds itself.

McNaney stressed the importance of understanding on behalf of the government. It would be helpful but somewhat disheartening, he said, if aid was given for the purpose of optics or simply following global trends.

“I think the question for us will be the following: are we going to see sectoral support driven because of a recognition that we have been a massive outlier compared to other countries… or are we moving because there is a tangible understanding of the infrastructure … withering on the vine?”

“I hope that it’s understanding how we support the overall economy and what we’re going to lose [if the industry continues to suffer],” he concluded.

In the United States, Sharon Pinkerton, senior vice president, legislative and regulatory policy, Airlines for America (A4A), weighed in on the possibility of a second round of funding for the aviation industry from the government, which could be a boon to airports and airlines alike.

“I think the fate of the airlines and airports is definitely tied here,” she said. “We will continue to advocate with Congress and the current administration to come together now.”

Pinkerton mentioned the recent involuntary furlough of 32,000 employees by American Airlines and United Airlines as an example of the consequences of inaction. She mentioned tens of thousands of layoffs among regional carriers, as well as loss of service to many smaller communities around the country.

Also important right now, she said, is environmental impact. Reducing the size of a carbon footprint is something many are looking at; especially, she says, with Airbus and Boeing preparing to announce new aircraft model. The traffic lull also presents an opportunity to enhance health and safety measures, Pinkerton maintains.

“It’s the very engineering of the plane,” she said. “The way the air is filtered every few minutes, with new air coming in.” Advanced air filtration combined with robust cleaning practices can help reassure and attract passengers, more important than ever in a time where word-of-mouth is how many are deciding whether or not they’d like to return to air travel, Pinkerton said.

When that return to air travel will come remains uncertain. “As we start to think about how long it might take to get a vaccine, not just introduced but widely disseminated and widely accepted and used, I think we’re looking at 2023, maybe 2024, just for volume,” she said. “After the volume comes back, it’s not clear how long it’s going to take to return revenues… There’s a lot we don’t know.”