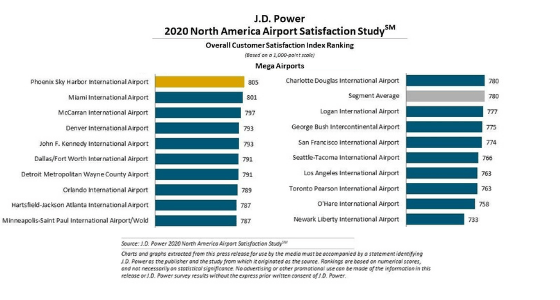 Satisfaction with North American airports reached a record high this year as the volume of passengers severely dwindled due to the impact of the COVID-19 pandemic.

According to the J.D. Power 2020 North America Airport Satisfaction Study, released today, satisfaction with North American airports has risen sharply since the onset of the COVID-19 pandemic, reaching a record high of 784 (on a 1,000-point scale) as passengers breeze through security checkpoints, baggage claim and food and retail services.

“Over the Labor Day weekend, airport passenger volumes climbed to 40 percent of year-ago levels as travelers slowly started to trickle back onto airplanes,” said Michael Taylor, travel intelligence lead at J.D. Power. “Compared to the pre-COVID-19 environment when most airports were running significantly over capacity, the lack of crowds and long lines is actually creating a very convenient experience for travelers right now. Obviously, this lower passenger volume is not sustainable for most airports. Airport managers are doing all they can to provide a safe and clean environment to facilitate a rebound in travel.”

J.D. Power said the overall customer satisfaction score, at a record high of 784, was up 22 points from 2019. This unprecedented leap in satisfaction is driven by significant improvements in satisfaction with the check-in and in the food, beverage and retail factors. Passengers also gave airport terminals with high marks for cleanliness, less crowding and lower noise levels—all of which are positively affected by record-low passenger volumes, the company said.

Local still resonates with passengers, J.D. Power said, noting that the common bond among top-ranked airports such as PHX, DAL and IND is an open, airy experience that feels more like a well-designed shopping mall than an airport. “These airports also do a good job of conveying local flavor in their passenger experience, from food and beverage offerings that feature regional specialties to design cues that evoke local color,” the company said.

Many survey respondents applauded the airport response to COVID-19, with nearly one third (30 percent) of travelers saying their opinion of the airport they traveled through had improved after seeing its response to the pandemic. More than two-thirds (68 percent) said their opinion had not changed and just 2 percent said they had a more negative view of their airport since the pandemic.