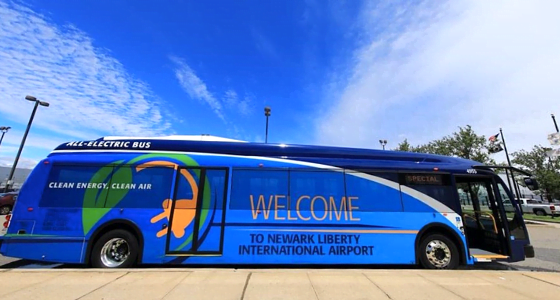 The 12 buses at each of the three airports will cut down on both greenhouse gases and local air pollution as the buses serve passengers and employees daily, traveling between airport facilities including parking garages and terminals. The electric fleet is projected to save a combined total of approximately 1,600 tons of greenhouse gas emissions and about 240,000 gallons of diesel fuel annually.

“All-electric buses represent the future. The Port Authority is committed to doing its part to respond to the existential threat posed by climate change,” said Rick Cotton, executive director of the Port Authority. “Delivering early on our pledge to acquire these 36 all-electric buses exemplifies our aggressive action to implement our sustainability agenda that ranges from dramatically increased use of electric vehicles, to providing clean rail mass transit links to our airports, to expanded use of renewable energy, to clean building standards, to energy efficiency and beyond.”

In order to support the increase in electric vehicles from both the Port Authority and its customers, more than 150 additional charging ports have been installed across agency facilities, including the charging ports for the airport electric shuttle buses.