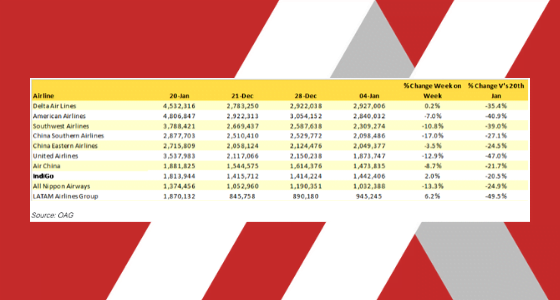 Airports in North America saw a much-needed boost in passenger traffic during the holiday season but are now facing a likely slow start to 2021. With the pandemic still raging in most parts of the world and few major holidays to drive traffic, travelers are expected to be in hunker-down mode.

Global flight tracker OAG is predicting reduced capacity around the world for January, after the industry broke through the 60 million seat barrier during Christmas week. “The early Christmas present of breaking that sixty million was just that: a present, and this week’s 59.6 million is perhaps likely to be as good as we can expect in the next few weeks,” OAG said in a blog post.

The company noted that general leisure traffic is typically depressed during January and there are no major holidays on the calendar. “No surprise then that for the first time in a long while, forward capacity for next week and beyond is actually below this week’s level, and that is before network planners factor in the next planned series of lockdowns,” the company said.

There is cause for optimism, however. Steve Van Beek, director at global transportation consultancy Steer, said airports in North America will almost certainly struggle in the first quarter but some, particularly those in leisure destinations, will see bookings pick up beginning in March or April. That’s assuming, of course, that the rollout of the vaccine goes fairly smoothly, he said.

Bill Swelbar, chief industry analyst for the Swelbar-Zhong Consultancy, said early reports that the vaccine could be available for up to 80 percent of the population by the summer are encouraging. “It makes me start to think we may see a little more of a bounce in 2021 than we anticipated,” he says. “The year will definitely start slow, but those trips for June, July and August are booked in February and March.”