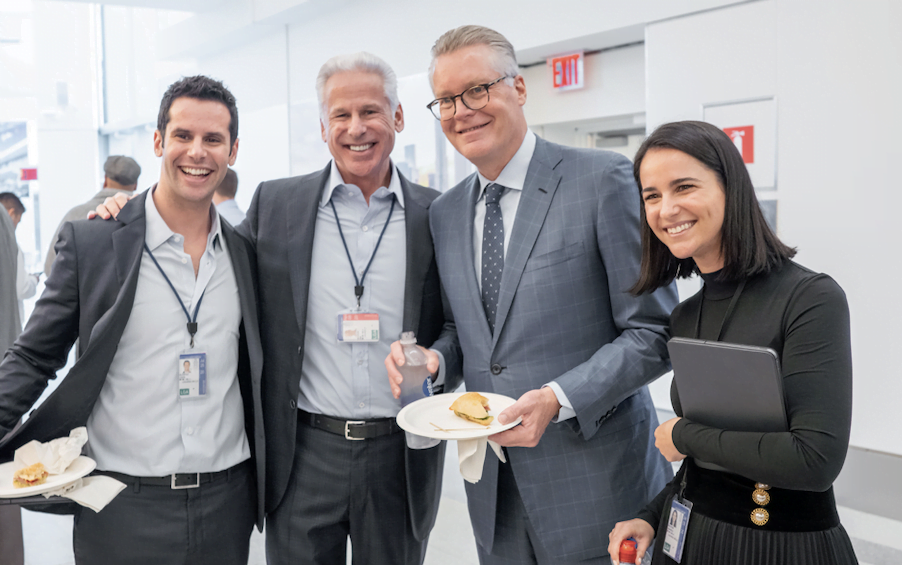 “Whenever we go into a city, we always focus on that city’s cuisine and that city’s chefs,” says Rick Blatstein, founder and CEO of OTG. Rossi Pizzeria is one of the dining options OTG is bringing to LGA travelers, and it’s led by Chef Mark Iacono, owner of the well-known, Brooklyn-based pizzeria, Lucali. Then there’s Flatiron Tavern & Provisions, a contemporary tavern concept headed by the New York City-based owners of Italian restaurant King, chefs Jess Shadbolt and Clare de Boer. “We’ll be 24 years old in January, and local flavors have been our focus since day one, and that will absolutely always continue.”

Dinner isn’t the only meal OTG accounts for in its concessions program, though. Juice Press is a local favorite for fresh food, smoothies and juices. H&H Bagels, popular among New York locals, and Birch Coffee – which boasts 11 existing locations around New York City – are both available in the new concourse for morning travelers. Cohabitating in one space, the coffee shop and bagel eatery are also wholly unique.

“Look at one location: it’s H&H Bagels and Birch Coffee in the morning – so two locations – and then in the afternoon it changes to Rossi Pizzeria and takeout,” says Blatstein, explaining the transformative nature of the concepts. Optimizing the offering for every time of day not only caters to the needs of the airport’s travelers but saves an immense amount of square footage by eliminating the need for three separate outlets. “So really, if you think about this, it’s three locations in one space.”

OTG has more coming to U.S. airports in the next year, as well. “You can expect to see the continued evolution of OTG,” says Blatstein. “We don’t sit still for anything. We’re constantly learning about our customers; we’re learning about our crew members and we’re continuing to evolve our company and the experience. You will see tremendously more evolution from us.”