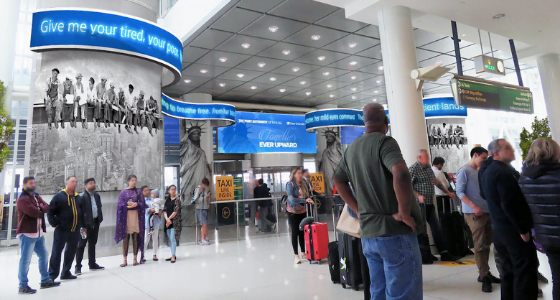 The deal, which also includes New York Stewart International (SWF), is expected to be finalized in mid-November and go into effect December 30, 2020. CCA, a division of Clear Channel Outdoor Holdings, said the advertising platform transformation will begin with EWR’s Terminal One redevelopment project and in conjunction with new LGA facilities.

CCA added that 95 percent of the overall investment in the new deal will go into highly impactful digital media. The deal contains a two-year transition period to account for the impact of COVID-19 and the traffic recovery at Port Authority facilities.

“We are confident in the audiences these world-class airports will deliver to our advertising partners over the longer-term as business and leisure travel ramps,” said Scott Wells, CEO, Clear Channel Outdoor Americas. “The PANYNJ airports are gateways to the world, and, as the region recovers, we believe our team is best suited to lead this historical transformation that will reimagine and modernize the brand experience for travelers.”

The actual MAG (minimum annual guarantee) due each year, as well as capex spend, after the two-year transition period will be dependent upon passenger traffic at JFK, EWR, LGA and SWF.

“These contracts advance two key priorities for the Port Authority: increased ad revenue and significant investment in modern digital infrastructure at our facilities,” said Rick Cotton, PANYNJ executive director. “Moving forward, these contracts will enable the Port Authority to better sell advertising rights to generate hundreds of millions of dollars in revenue, while travelers will benefit from the latest in digital display technology that allows for real-time alerts.”

The CCA deal was among four ad deals announced this week by PANYNJ that cover advertising opportunities in aviation, billboards, bus terminals and PATH trains. Combined the contracts are expected to generate nearly $400 million in revenue for the agency over the next 12 years.