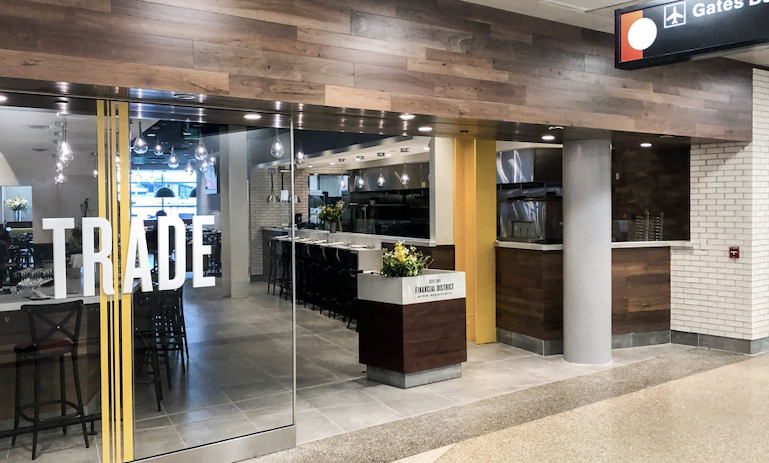 A slew of new concessions have opened recently or are scheduled to open as part of the revamp of the concessions program at Boston Logan International Airport (BOS). MarketPlace is the developer for the program.

One prominent addition is an airport location for Boston Public Market, which has operated a street location for four years. HMSHost is bringing the 6,000-square-foot Boston Public Market outpost to Terminal C this fall. The market will offer fresh food from Massachusetts and New England for breakfast, lunch and dinner. The new location will feature several food entrepreneurs currently at the street location, in addition to a grab-and-go snack option, salad bar, and full-service Market Bar with beer, wine and liquor.

Designed to mirror the Boston location, vendors will be represented in stall-style units surrounded by corrugated metal and salvaged barn board accents. Seating will be available in the center of the space, and a “HUB” board will display Market news and promotions.

“Boston Public Market at Logan Airport will bring the experience of New England’s culinary landscape to new heights by offering its unique character and charm in the airport. Today, airports serve as a platform to launch culinary and consumer trends and we look forward to opening BPM to provide fresh, locally-sourced products for travelers from around the world to enjoy,” says Anthony Alessi, vice president of business development, HMSHost.

HMSHost is also opening Trade, a casual-dining Mediterranean restaurant by James Beard Award-winning Chef Jody Adams. It is a local establishment that opened in 2011 in Boston’s financial district. HMSHost also has Sullivan’s Castle Island, a seaside eatery, in its lineup. Both Trade and Sullivan’s are located in Terminal B.

According to MarketPlace, the relocation of Southwest Airlines to Terminal B prompted a transformation of the food court. In addition to the Sullivan’s Castle Island, options include B. Good and Michael Schlow’s Tico, both from Delaware North, as well as Maine favorite OTTO Pizza, operated by AirVentures.