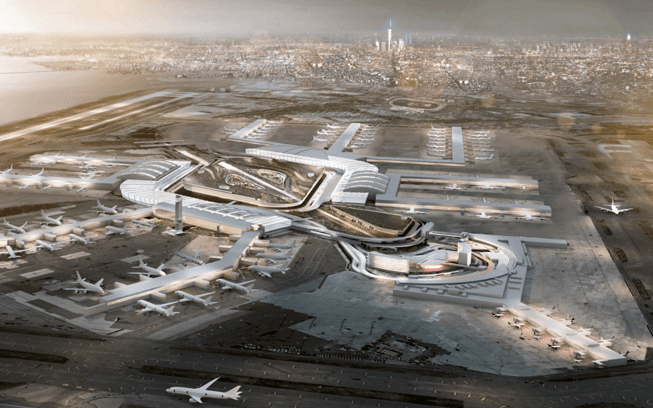 JetBlue Airways has chosen JFK Millennium Partners, a partnership between Vantage Airport Group and RXR Realty, to spearhead its upcoming terminal expansion at John F. Kennedy International Airport (JFK). The expansion is projected to cost between $2 billion and $3 billion and will include increasing gate size in Terminal 5 to fit wide-body planes.

Currently, JFK’s Terminal 5 houses 29 narrow-body gates. The plan for expansion could add as many as 12 larger gates.

JetBlue also has plans to expand from Terminal 5 to Terminal 6 and maybe Terminal 7.

The Port Authority of New York and New Jersey will work in a partnership with JetBlue to determine a way forward with its expansion project.

“After conducting an eight-month competitive process, we’ve selected a consortium of Vantage and RXR for our expansion plans at JFK Airport,” says Lisa Reifer, vice president of infrastructure, properties and development for JetBlue. “This is an incredibly complex and exciting undertaking. Both Vantage and RXR have the relevant expertise and experience. Their team combined with ours is a great combination for success.”

Vantage Airport Group, which is also taking part in the redevelopment of LaGuardia Airport (LGA) Terminal B, will lend its more than 20 years of experience in airports to JetBlue’s JFK expansion. According to a representative from Vantage, the project is still in its very early days.

“Vantage Airport Group is proud to have formed JFK Millennium Partners with RXR Realty and to have been selected by JetBlue Airways to deliver a new world-class facility and passenger experience at the airport,” says George Casey, chair and CEO of Vantage Airport Group. “We look forward to bringing our global expertise and successful partnership experience to this project and to working collaboratively with the Port Authority of New York and New Jersey, the other airlines serving JFK, and other key stakeholders in and around the airport to advance this important infrastructure project.”