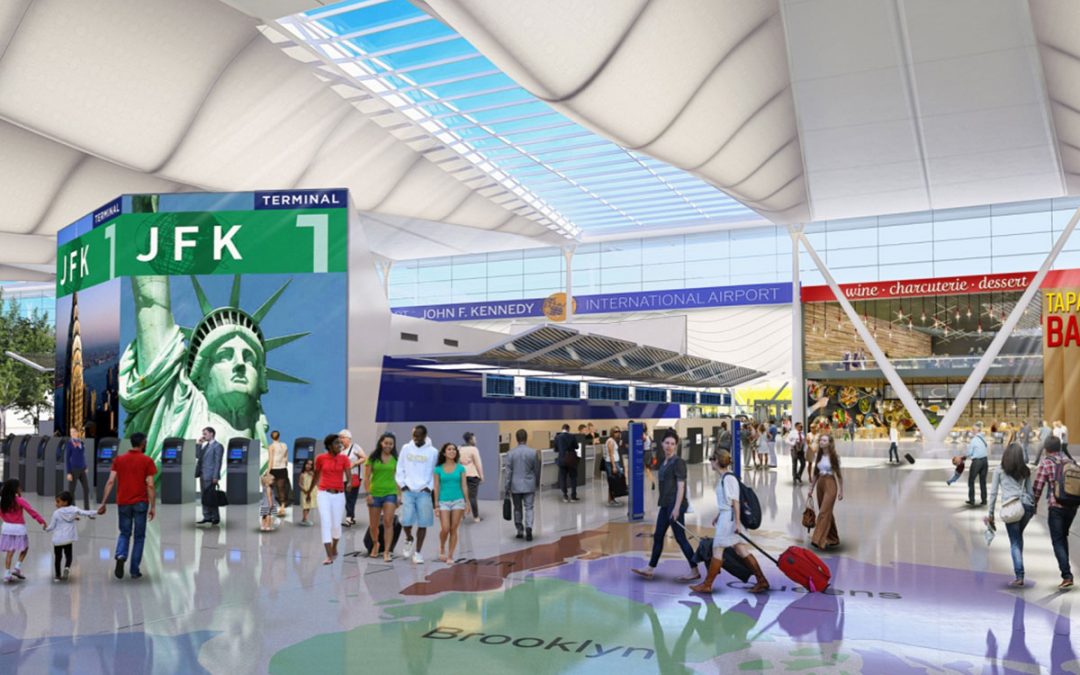 JFK To Get Two New Terminals In $13 Billion Project

Two new international terminals will be built at John F. Kennedy International Airport (JFK) in a mostly privately financed project that will modernize and expand the aging facility, New York Governor Andrew Cuomo said Thursday. This week’s announcement adds details to the project that was originally announced in the governor’s 2017 JFK Vision Plan.

The plan calls for a transformation of JFK with two new world-class international terminal complexes on the airport’s north and south sides. The governor’s office said the project will result in a “unified and interconnected airport system with best-in-class passenger amenities, centralized ground transportation options and vastly improved roadways that collectively will increase the airport’s capacity by at least 15 million passengers a year.”

Of the $13 billion, $12 billion for the project will come from private sources, mainly airlines. The south side terminal will be developed by the Terminal One Group, a consortium of four international airlines: Lufthansa, Air France, Japan Airlines and Korean Air Lines. It will be operated by Munich Airport International. The north side terminal will be developed by JetBlue. The Port Authority of New York and New Jersey, which operates JFK, will invest $1 billion in the project.

The JFK Vision Plan, initially unveiled in January 2017 and based on recommendations from the Governor’s Airport Advisory Panel, calls for an overhaul of the airport’s hodgepodge of eight disparate terminal sites into one unified JFK Airport by demolishing old terminals, utilizing vacant space, and modernizing on-airport infrastructure, while incorporating the latest in passenger amenities and technological innovations.

The Vision Plan also calls for increasing the number and size of gates, improving parking availability, an array of airside taxiway improvements to allow for bigger planes and reduced gate congestion, upgrading the AirTrain JFK system to handle increased passenger capacity, and enhanced roadways on and off the airport.

Terminal One Group will develop the new $7 billion, 2.9-million-square-foot south side terminal.

The plans call for replacing JFK’s Terminal 1, which the group currently operates, and the functionally obsolete Terminal 2, as well as the area left vacant when Terminal 3 was demolished in 2014. When completed, it will yield a net increase of more than 2 million in square feet from the existing terminals and provide 23 international gates, 22 of which will be designed to accommodate larger, wide-body aircraft.

The new terminal will contain at least 24 security screening lanes; more than 230,000 square feet of retail, dining and other concessions; 116,000 square feet of airline lounges; and 55,000 square feet of interior green space, children’s play areas and cultural exhibits. The complex will be operated by Munich Airport International and also be connected to the existing Terminal 4, which initially opened in 2001 and has been expanded twice since then, most recently in 2013.

On the airport’s north side, the proposed new $3 billion, 1.2-million-square-foot terminal will be developed by JetBlue. JetBlue plans to demolish functionally obsolete Terminal 7 and combine it with the vacant space where Terminal 6 was demolished in 2011 to create a world-class international terminal complex. The complex will  be connected to the airline’s existing Terminal 5 and be occupied by the airline and its various partners currently spread throughout the airport. Terminal 5 opened in 2008 and is the newest of JFK’s current six terminals.

An additional $2 billion in private non-Port Authority funding will be allocated to an array of critical infrastructure upgrades laying the foundation for these world-class new terminals, Governor Cuomo’s office said.

The plans for the two terminals still must be submitted to the Port Authority’s Board of Commissioners. Once lease terms are finalized, the leases will be subject to final Board approval. Additional discussions with multiple other airlines and terminal operators remain ongoing to further advance the goals of the Vision Plan, the governor’s office said.

Following the two terminal projects, PANYNJ will seek proposals to develop the new Kennedy Central hub. The authority plans to issue a Request for Information in the coming months to determine the most effective and functional way move forward on the project. Options might include, but aren’t limited to, public open and recreational space, conference centers, cultural uses and other amenities for the traveling public and the airport’s workforce.