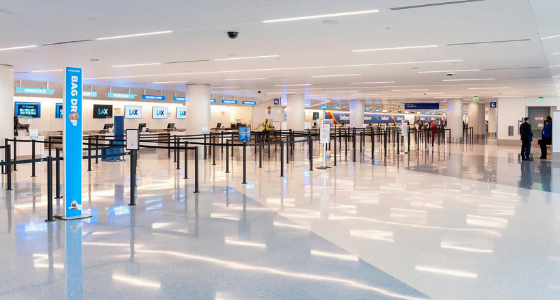 The addition to Terminal 1, which was described as Terminal 1.5 during construction, includes the first of seven Terminal Vertical Cores to open at LAX. In the Terminal 1 core, elevators and escalators will provide passengers access to a pedestrian bridge that will connect to the future APM train system’s Center Central Terminal Area (CTA) station.

“The opening of this Terminal 1 extension is another major step toward a fully transformed and fully connected LAX,” said Justin Erbacci, CEO of Los Angeles World Airports (LAWA), operators of LAX.  “It provides a further glimpse of our incredible future – one that will offer world-class facilities, setting the stage for a reimagined LAX.”

In 2017, Southwest Airlines signed a ground lease with LAWA for land located between Terminals 1 and 2 and oversaw the construction of the terminal extension. LAWA will eventually acquire the improvements from Southwest, with funds coming from LAX’s operating revenues and airport revenue bond proceeds. No money will be used from the city’s General Fund or taxpayers.

Hensel Phelps served as the general contractor on the Terminal 1.5 project, while PGAL was the architect. Construction began in 2018, with a total of 2,955 workers, including 31.5 percent local workers, involved in the project. Of 1,008,300 hours worked, 30.2 percent were by local workers.

The extension to Terminal 1 was built with sustainability in mind and features a new recycled water system, an advanced lighting control system programed to increase or decrease the artificial light depending on both the time of day and number of occupants, and advanced energy efficient air handling units.