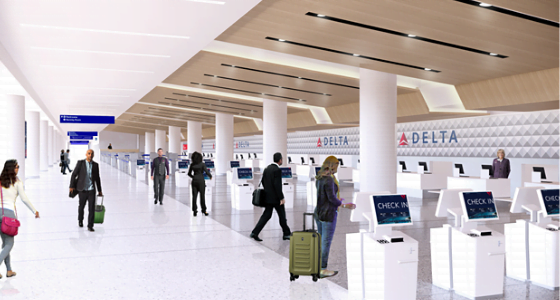 Los Angeles International Airport (LAX) and Delta Air Lines secured the final beam for Phase 1 of the Sky Way transformation project at LAX, a $1.86 billion project to modernize, upgrade and connect Terminals 2, 3 and the Tom Bradley International Terminal that is currently running 18 months ahead of schedule.

Airport officials said construction gained efficiencies due to lower passenger traffic at LAX and the temporary closure of Terminal 3, adding the Sky Way project is now expected to open in mid-2023, instead of late 2024.

“As we reimagine Los Angeles International Airport, the modernization of Terminals 2 and 3 is an example of how we are realizing our goal to be one of the top international airports in the world by creating new facilities and passenger experiences that are modern, streamlined and built on a framework of advanced technology,” said Justin Erbacci, CEO of Los Angeles World Airports (LAWA), operator of LAX.

Included in the Sky Way transformation project will be Delta’s LAX central headhouse, which will include a consolidated check-in lobby, security checkpoint and bag claim facility as early as the first quarter of 2022.

The overall facility will also provide connectivity after security between Terminals 2 and 3, which is currently only possible via walking or a shuttle bus. The project also provides easier access to the LAX Automated People Mover, which is set to open in 2023.

“If there’s a silver lining to fewer people flying right now, it’s that we have an opportunity and a team with the know-how to pull the future forward on infrastructure projects like Sky Way at LAX to deliver an exceptional experience much faster than planned for our customers and employees,” said Mark Pearson, Delta vice president of corporate real estate. “This is all possible thanks to the incredible support of LAWA, the City of Los Angeles and our construction partners who are aligned with our vision, and our employees who continue to be nimble in supporting customers throughout each phase of construction.”

The Sky Way project is part of the $14 billion LAX Modernization Program that will see LAX transformed in advance of the 2028 Olympic and Paralympic Games in Los Angeles.