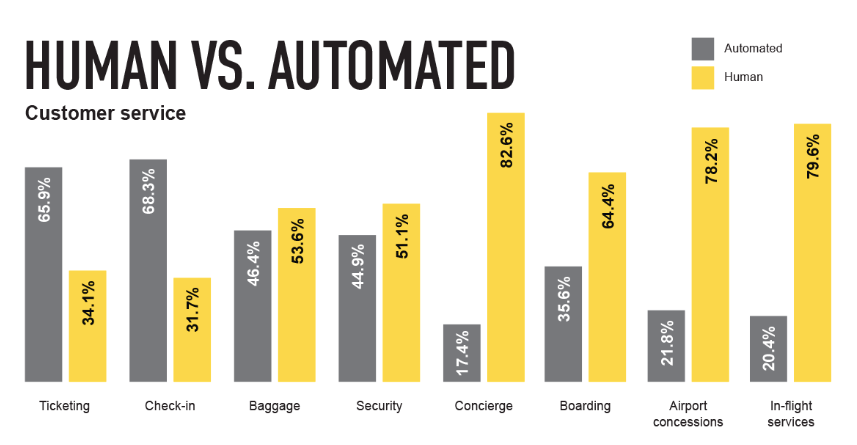 Increasingly, airports are embracing the idea of the 21st century; with biometrics, robotics and automation popping up more and more throughout the airport experience, significant amounts are spent each year on innovating, upgrading and maintaining a whole host of new and developing technologies.

A new survey recently published by OAG, however, suggests this may not be the wisest choice. According to the 2,000 people surveyed via OAG’s FlightView app, travelers overwhelmingly prefer human interactions over automated ones in customer service contexts, especially in the airport concessions category.

The millennial generation is the outlier. Millennials proved 30 percent more likely to prefer automation across the board when compared to fliers over age 50, including in retail and in-flight services. This may be why OAG predicts that “positive sentiment toward automation [will] climb over the next few years – and ultimately become the clear preference for most travelers.” This based on the closeness of the numbers between those who prefer automation and those who prefer human interaction in areas such as security and baggage.

Business travelers, as well, were 23 percent more likely than leisure travelers to prefer and, in fact, be looking forward to full automation of airport services. That said, travelers across the board are eager for technology that streamlines and shortens the time spent waiting in lines. In addition, 54 percent of travelers surveyed believed the most helpful improvement within the terminal would be turn-by-turn GPS-navigation to assist in finding the correct gate.

Amid this unclear picture of travelers’ readiness for further automation of the airport experience, OAG suggests airport decision-makers invest their money automation-adjacent, in intelligence.

“Travelers value accessible and trustworthy information substantially more than emerging technologies like robotics and biometrics,” says OAG in their analysis of the survey. It says 78 percent of travelers surveyed would embrace predictions about delays and cancellations, 75 percent would like real-time updates on boarding times, 77 percent want information on security wait times and 55 percent would like the walking times between gates and terminals. “An informed traveler is a happy and relaxed traveler, and relaxed travelers spend more,” says OAG.