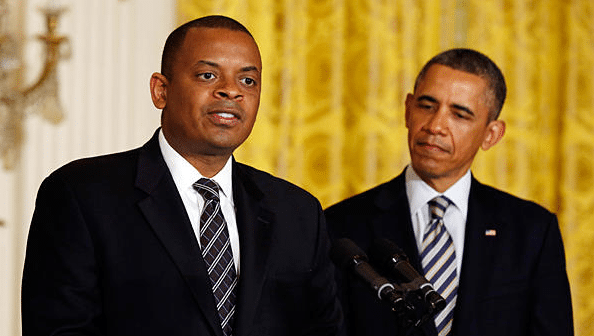 President Barack Obama has officially nominated Charlotte Mayor Anthony Foxx to be the next transportation secretary of the United States.

In making the announcement, Obama said Foxx would bring experience implementing transportation programmes at the local level to the top transportation job in his Cabinet.

Obama cited Foxx’s support for transportation investment in Charlotte during his tenure as mayor, particularly public transit projects like light rail and streetcars.

“Mayor Foxx has a strong record of public service and will bring a fresh perspective to the infrastructure challenges facing our country,” NATCA chief Paul Rinaldi. “We look forward to working with him once confirmed on the vital issues involving our National Airspace System.”

Greg Principato, president of US airports industry group ACI-NA said: “ACI-NA looks forward to working with him to ensure airports can obtain the necessary financial resources to make the critical safety, security and operational improvements necessary to serve passengers and shippers today and in the future.”

Charlotte-Douglas International Airport had 41.2 million passengers in 2012, a 5.6 per cent increase over 2011.

If confirmed by the Senate, Foxx would replace Ray LaHood, who announced in January he wouldn’t serve a second term.

Foxx was sworn in during a private ceremony with his wife and two children Tuesday at the department’s headquarters. The department says he’s spending his first day focusing on transportation safety and preparedness for hurricanes and severe weather.

Foxx says under his tenure, safety will remain the department’s top priority. He says he’ll work on efficiency and infrastructure needed to make sure the nation’s transportation system works for future generations.

Foxx’s background includes stints as a Justice Department attorney and a Democratic aide to the House Judiciary Committee.