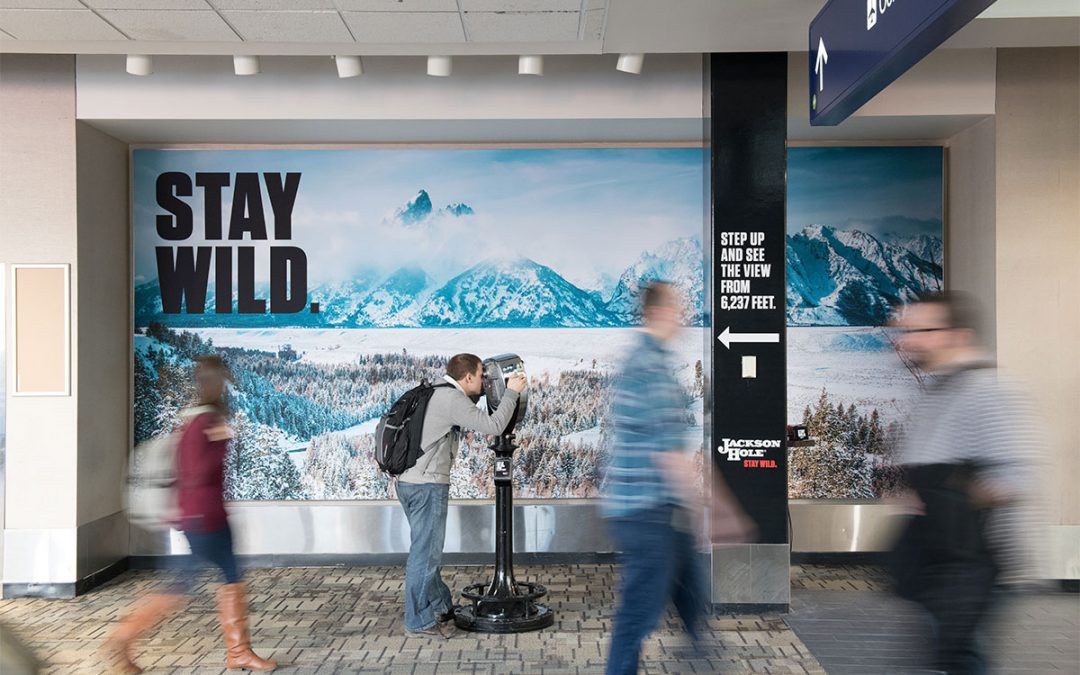 Off the Page: Entertainment And Branded Installations Showcase How VR Can Be Integrated Into Airports

Is Virtual Reality (VR) the killer app that can get travelers to look up from their smartphones while in airports? Several airports in recent months have begun testing out that notion, both with entertainment-centric and branded VR experiences.

At Terminal 4 at John F. Kennedy International Airport (JFK), concessionaire Paradies Lagardère has partnered with Periscape VR on a Virtual Reality Experience Center, a six-month pop-up kiosk that provides the terminal’s 70,000 daily travelers with the opportunity to see firsthand what VR is all about.

The center features freestanding VR Towers with 12-goggle equipped stations with VR content specifically tailored for the international travel. Users pay $1-$2 per minute for the five- to 10-minute experiences ranging from immersive ocean encounters with whales and other sea life to space exploration to games such as Fruit Ninja and the music-themed Audio Shield.

Edward Midgley, vice president of commercial for JFKIAT, the company that manages Terminal 4, says the goal of the temporary exhibit is to provide travelers with a different experience during dwell times, while also determining if passengers will gravitate toward new terminal activities. “It’s like a little laboratory,” says Midgley. “We’re working with Periscape VR to get some good data from passengers on how they like it, especially in this type of public space.”

Though it’s only been open since mid-June, Midgley says anecdotally the VR kiosk seems to be generating plenty of interest, even with passersby stopping to watch people don the goggles and wave and move around as they engage with content.“It creates a buzz within the terminal, almost a feeling of community as bystanders ask people how the experience was and should I try it,” he says.

Though VR is still a relatively new technology for many people, Savaria says travelers quickly grasp what the Experience Center can offer. “Travelers are drawn to this impressive display, and through just being curious about the towers, they’re able to quickly learn how to use and enjoy the virtual reality experience,” he says. “The Experience Center games last between five to 10 minutes, so it’s not so long that travelers should worry (about missing their flight.)”

Lynn Rosenthal, founder and CEO of Periscape VR, adds, “I think most travelers have heard of virtual reality and are excited to try it. We have brand ambassadors as a concierge service to answer questions and provide the headsets to the user and provide great customer service. And this content has been curated specifically for international airport audiences during summer.”

With so many passengers passing through Terminal 4 on a daily basis, Rosenthal suggests the Experience Center is a great location for virtual reality content creators, some of whom are now spending an upwards of $6 million on development, to get their content exposed to a wider audience.

The installation is currently planned for only six months. Midgely says JFKIAT will look at a lot of factors, including how much revenue it generates, before deciding the next step. “We’ll also have to consider if a kiosk is the right format,” he adds. “What’s good about this space is it’s out in the open and very visible—people can see it and that seems to be a factor that’s contributing to its success. If you try to put it in a defined retail space, you might lose that effect.”

Periscape VR’s initial foray into North American at Terminal 4 is exclusively entertainment/game focused, but Rosenthal says the company is also looking at some form of branded VR content in airports going forward.

Though it can be fairly costly to put together a VR experience, some brands have already worked with advertising airport concessionaires on short-term projects that build brand messages into VR experiences. JCDecaux is working with Visualize on an immersive VR video experience at London’s Heathrow Airport (LHR) to educate advertisers on the benefits of in-terminal ad programs.

Called “Stay Wild,” the campaign showcased the scenery and activities that make Jackson Hole such a special vacation destination.

“As people were in town for the Super Bowl, they would stop and see this display and view, for example, what it’s like going down a ski slope,” says Brian Bloch, marketing director for Clear Channel Airports, adding many of those travelers also ended up posting about the VR experience on social media, furthering extending the reach of the program.

“When brands have done really good activations like Facebook at Denver, there were lines of travelers waiting to participate,” says John Moyer, Clear Channel Airports senior vice president for airport development. “One of the greatest benefits is the ability for VR to create immersive and emotional experiences. This creates brand awareness for both advertisers and the airport as the passenger will remember the experience and where the experience occurred.”

Editor’s note: The full version of this article appears in the August 2018 issue of AXN Magazine. Click here to subscribe.