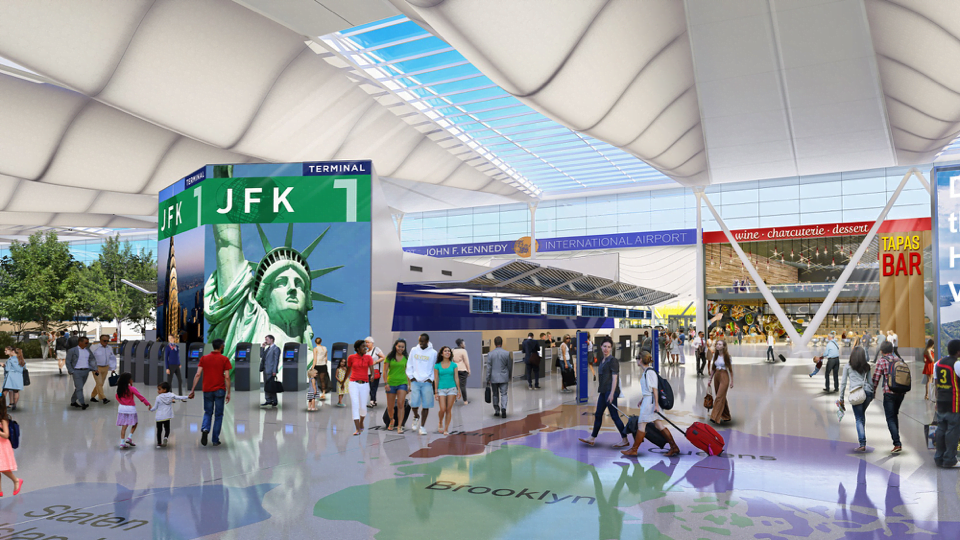 The Port Authority of New York and New Jersey (PANYNJ) Board of Commissioners this week approved a proposed lease for The New Terminal One on the south side of John F. Kennedy International Airport (JFK).

“The Port Authority’s board authorization today shows important progress toward the agency’s mission to ensure a 21st century customer experience by transforming our legacy assets into modern gateways,” says Kevin O’Toole, Port Authority chairman. “The New Terminal One is one of the major pillars of the redevelopment of the new JFK and builds on the success of the newly restored TWA Hotel, which opened earlier this year.”

When completed, the New Terminal One will yield a net increase of approximately 2 million square feet from the existing terminals, providing 23 new international gates, 22 of which will be designed to accommodate larger, wide-body aircraft such as the Boeing 787 Dreamliner or Airbus A380.

The planned terminal will contain at least 20 security screening lanes, more than 200,000 square feet of retail, dining and other concessions – with 50 percent of food and beverage venues already reserved for New York and Queens-based businesses, 116,000 square feet of airline lounges, and 55,000 square feet of interior green space, children’s play areas and cultural exhibits.

The complex will be operated by Reach Airports LLC (a joint venture between Munich Airport International and CAG Holdings) and also be connected to the existing Terminal 4, which initially opened in 2001 and has been expanded twice since then, most recently in 2013.

Plans for the New Terminal One include implementing existing and emerging technology such as  biometric screening, automated security and boarding gates, self-service check-in kiosks, automated bag drops, arrival baggage screening, security surveillance with intelligent video analytics, and infrastructure to support Single-Token Identification, the Internet of Things, and the 5G network.

The project is part of New York Governor Andrew Cuomo’s JFK Vision Plan, a $13 billion initiative, which includes $12 billion in private funding, to transform JFK into a modern 21st century airport anchored by two new world-class international terminal complexes on the airport’s north and south sides. It is expected to increase the airport’s capacity by at least 15 million passengers a year.