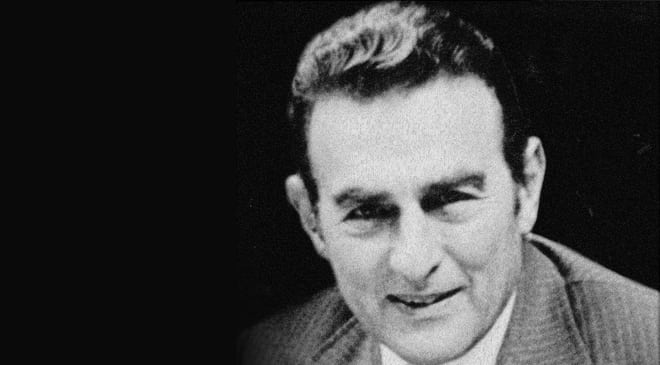 Born in 1921 in Atlanta, Dan Paradies joined the United States Army Air Corps during World War II. He served for four years, rising to the rank of lieutenant. Upon being discharged from a hospital following a mid-air collision of which he was the lone survivor, Paradies returned to Atlanta and joined his family’s wholesale toy and house wares distribution business, Paradies and Co. One day, Atlanta Mayor Bill Hartsfield reached out to Dan Paradies to open a toy and gift shop at Atlanta Municipal, which would later become Hartsfield-Jackson Atlanta International (ATL). After he and his brother Jim convinced their father that it was a worthwhile pursuit, The Paradies Shops was founded in 1960. Dan Paradies would serve as the company’s president and CEO until his retirement in 1994.

“He made every employee feel like they were part of the Paradies family and not just the business,” says Gregg Paradies. “He said, ‘Our competitors could copy many things we were doing but the one thing they cannot do is copy the culture.'”

He also makes mention of Dan’s infectious personality, which helped to establish many lasting relationships. The ability to forge these bonds is what Gregg Paradies says he thinks helped narrow the gap between what were then the larger companies versus the then-smaller Paradies.

“To compete with the big boys, he knew he couldn’t compete on price alone,” says Gregg Paradies.

He also shares how Dan instilled the value of work ethic from the top on down.

“Dan worked seven days a week,” Gregg recalls with a laugh. “If I wasn’t there on a Saturday, he would want to know where I was.”

“I met Dan for the first time in 1989, the year I was appointed executive director of the Sarasota Manatee Airport Authority,” Vacar says. “He was among the first to congratulate me. I really enjoyed his outgoing personality and the fact he was genuinely concerned about relationships, not just business.”

Rick Piccolo, the current president and CEO of Sarasota Bradenton International (SRQ), fondly remembers a similar experience when he worked in operations at Tampa International (TPA) 30 years ago.

“My wife Sally and I went to a dinner function during a Florida Airports Council Conference that Dan and his company were hosting,” recalls Piccolo. “We ended up being seated right next to Dan and his wife.  Although I was a lower level manager at the time and had never met him before, he treated us like I was the Chairman of the Board.”

“From the first time I met Dan, he always remembered my name and treated me like I was the most important person he had met that day,” says Brockman, who met Dan Paradies nearly 30 years ago. “Dan’s memory and sincere interest and love of people was always evident. The industry has lost a great one and I will miss him personally.”

Vacar also noted Dan Paradies’ skill in regard to merchandizing and willingness to try “out-of-the-box thinking,” such as a partnership with PGA stores.

“I remember while in Sarasota, Dan had an exclusive arrangement with Callaway Golf, and despite huge competition in Sarasota for golf equipment sales, many in the community came to the airport to shop.”

“He helped bring concessions to the forefront of the discussions,” says Gregg Paradies. “Prior to that, concessions were an afterthought.”

At the time, there were a few large operators who did both food and retail. Dan Paradies pushed for retailers to handle retail.

“I got to know Dan long before I actually got to do business with his company,” says Tom Greer, currently the general manager for Monterey Regional (MGM), who, while at Burbank Bob Hope (BUR) saw the company win a retail package at the airport. “We were successful in awarding the work to Paradies and the Airport has never looked back.  It’s been a great fit ever since.”

Upon retiring, Paradies focused on the next phase of his life. Though he had always been involved in many charities, he focused on his charitable efforts, establishing the Daniel M. Paradies Foundation, which supports organizations such as the Sarasota Ballet in the Florida State University Center for the Performing Arts; the Billie and Dan Paradies Scholarship Fund at the Ringling College of Art and Design; the Goldie Feldman Academy for Educational Scholarships; Breast Health Sarasota Inc. and many more.

Though he had retired from the company 20 years ago, Dan Paradies still had a fondness for the airport industry. Gregg Paradies shares that one of his many lasting memories was visiting Dan in Sarasota, Fla., two months ago when his health began to deteriorate.

“We went out to lunch and then we went to what he enjoyed most and that’s going out to Sarasota airport,” recalls Gregg Paradies. Once inside, Dan had his usual donut and coffee at Dunkin’ Donuts.

“I had the good fortune to know Dan, and he will remain in my mind as one of the most remarkable people I will ever know,” says Vacar.

Paradies, preceded in death by wife Billie, is survived by his brother, James; sisters Doris and Janice; sons Major and Jed; and grandchildren Logan, Julia, Jacob and Siena.