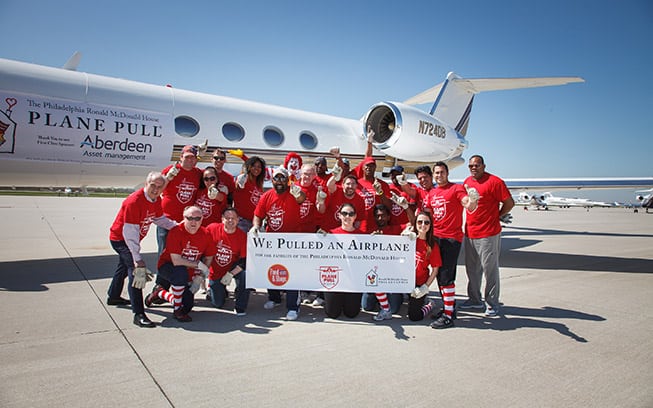 The Plane Pull, held May 2, is a tug-of-war event in which teams compete to see who can pull a plane over a designated distance in the shortest amount of time.

“Our merchants and the Marketplace PHL team have a strong commitment to giving back, and the Plane Pull is one of our favorite traditions,” says Mel Hannah, vice president and general manager of Philadelphia Marketplace Food & Shops. “We have a great time ‘pulling for the house’ and supporting local families who need a helping hand.”

Additionally, several Marketplace merchants at PHL formed their own teams this year: Chickie’s & Pete’s, Hudson Group and staff members from Smashburger, Peet’s Coffee and Jamba Juice respectively raised $9,100, $2,500 and $2,500. The Ronald McDonald House provides a home for families of critically ill children receiving treatment at local hospitals. There are two such houses in Philadelphia.