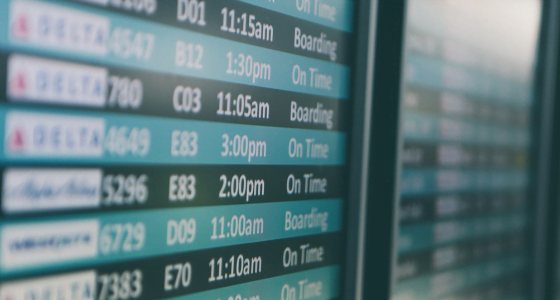 “Radical Change” Called For As Airports Grapple With Downturn

Deborah Flint, president and CEO, Greater Toronto Airports Authority (GTAA), called for a radical change in the business model for airports as the pandemic continues to quash demand for travel.

Speaking on the weekly industry call hosted jointly by the Airport Restaurant & Retail Association (ARRA) and the Airport Minority Advisory Council (AMAC), Flint said airports need to start grappling with the extent that the industry needs to change. Noting that the shift to online meetings means business travel will be slow to return, she called for action.

“I do believe that there is a future in this industry,” Flint said. “The stories are not going to be the same as Blockbuster Video – that we didn’t see the change that was needed. But we have a massive list in front of us to make this industry more competitive once again.”

She notes that even if 50 percent of business travel volume remains, “it’s a drastic difference to our business and our industry and the models that we’ve used before,” and is further exacerbated by the evolution of e-commerce. “This is a mission critical time to face the disruption, to not wait it out but to galvanize a real radical change in the industry to make sure we’re competitive as we emerge out of the crisis.”

Tamara Vrooman, president and CEO, Vancouver International Airport (YVR), was the second guest speaker on the ARRA/AMAC call. She called for expanded testing, along with stronger communications around the safety of travel, as a means to get people flying again.

“We’re doing a lot to get the story out there, to use people who have traveled for essential reasons to tell the story of how safe and competent they feel,” Vrooman said. “Our own polling data shows that when people have traveled, the experience vastly exceeded their concerns and expectations.” She added, however, that quarantine requirements and closed borders continue to hamper demand even if people are willing to fly.

Vrooman described some of the COVID-19 testing currently underway at YVR, and spoke of the need for getting consistency in testing. Noting the various security protocols passengers face before boarding a plane, Vrooman said that approach could be used for health screening.

“That layering approach, we think, is more or less what needs to be replicated in the health and the COVID testing environment,” she says. “By the time people are getting on an airplane, they’re not worried about the person sitting next to them, because they know, just like from a security point of view, we’ve all been screened and it’s safe from a health point of view.”

YVR is currently has a pilot program that screens select passengers on-site, with results in about 15 minutes. If the pilot is successful, “we might get to a place where everybody who’s on an aircraft has been screened for COVID in the same way that they’re screened for security and other protocols,” Vrooman said.

Toronto Pearson International Airport (YYZ) has a similar pilot program underway, Flint said. “It’s conceivable, and I believe, that we will need to learn how to co-exist in travel and in our everyday lives with COVID-19 for years to come,” she said. “Even if there is a medical solution … this year or early next year, the distribution profile to the public is going to take some time. So I believe that a testing regime and a design system across aviation is really, really important.”

Both speakers urged a global framework for testing, noting that global trade groups have called for the same. “Aviation is a team sport, and it doesn’t matter if we have it right here in Vancouver if the other end of the connection isn’t consistent and doing the same thing,” Vrooman noted.

Bigger picture, Flint urged call participants to be proactive and engaged during this time of change. “It does seem like a massive undertaking, right?” she asked. “And where do we begin? But look at the industry – how we radically changed after 9/11. Even though it was clunky for a long time, and it’s still plagues us in some ways, we were able to design a system that had counter-terrorism in it and ultimately more risk-based measures. So I’m confident that we can do it again.”

One positive development, Vrooman said, is that the lower traveler numbers have allowed YVR to better engage with tenants. “I think we’re really learning that we can achieve more for our individual businesses and our bottom lines if we work together than if we stay apart,” she said. “We’ve had far more data sharing in terms of marketing, in terms of where there are opportunities in terms of where the supply chain is working well for some businesses and not for others… We’re seeing a lot more information sharing that allows businesses to pivot and to make adjustments where they need to as we try and navigate our way through.”

Flint also called for more cooperation. “When we look at the model, we find out there’s so many parts that work well on the upside when business is growing, or even when business is flat, but in the decimation that we faced, many of those agreements and approaches just don’t work,” she said. “So rather than letting the courts battle it out, [my team has] worked incredibly hard to find different approaches and solutions that work. We all have to survive and, and, and pay the fundamental bills, but being creative and working through this together allows us to put our energy into the right thing, which is rebuilding our business.”