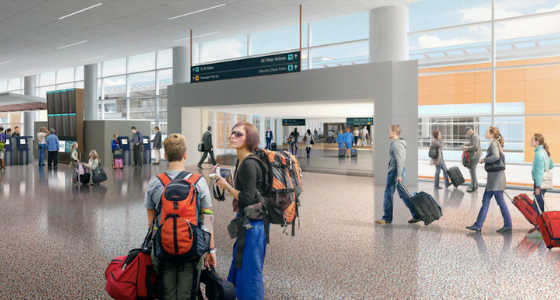 “To say we are excited to be here today is an understatement,” said Bill Wyatt, SLCDA executive director, “After six years of construction and many more years of planning, we are proud to open the first new U.S. hub airport in the 21st Century,”

The new SLC now features a two-level roadway system with an elevated road designated for departures, a 3,600-space parking garage with a camera-based sensor system to indicate where open spots are located and 56 charge stations for electronic vehicles.

HMSHost celebrated the opening of five new dining options, all featuring the “Fly Healthy Promise,” that includes enhanced health and safety protocols throughout the new airport and extending into dining and retail.

“We are excited to bring safe and accessible, not to mention amazing foodservice options to travelers as part of the newly relaunched Salt Lake City International Airport,” said Michael Price, HMSHost vice president of business development. “We are thankful to the Salt Lake City Department of Airports, the City of Salt Lake City, and our restaurant partners and teams for allowing us to safely enhance the dining experience in this new airport.”

“The opening of the new terminal and concessions at Salt Lake City International Airport is an important event because it represents our collective efforts as an industry to rebuild stronger than ever after COVID-19,” said Roger Fordyce, Hudson CEO. “Together with our partners at the SLCDA, our four new stores incorporate the highest level of safety SLC travelers are looking for without sacrificing the culture, spirit and ingenuity the capital city is known for.”

Paradies Lagardère is also opening five new stores this week, including an airport location of famed local retailer Hip & Humble, and its proprietary outdoor brand No Boundaries. These in addition to a new CNBC store and a TripAdvisor store. KSL, a new store named for local NBC TV affiliate, also opens this week.

Still to come are Johnston & Murphy, a lifestyle brand with classic apparel and accessories for men and women; an iStore; Liberty Park Market; InMotion; and Maverik, the popular regional retail brand that will provide travelers with essentials, electronics, and regional and gourmet items.

Inside the terminal are 24 restrooms with private lactation rooms, deep bathroom stalls and the Greeting Room, a large area that can accommodate 300 to 400 individuals, where friends, families and others can wait to pick up passengers once physical distancing measures are no longer in place.