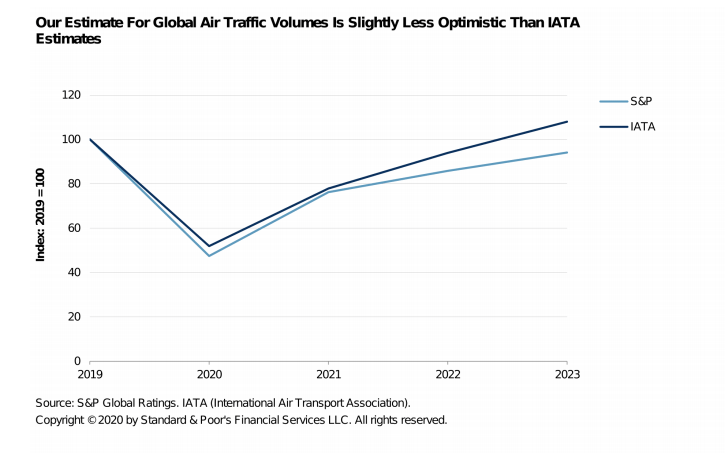 “It will be a much more protracted recovery than the rebounds observed after the 9/11 terror attack, the SARS pandemic of 2003 and the 2008/2009 global financial crisis,” said the report, authored jointly by six S&P Global Ratings analysts. “Over the longer term, we believe that air travel will eventually return when current health and safety concerns have been meaningfully addressed by the industry and consumer confidence rebounds.”

The analysts said airports will operate under a “new normal,” characterized by  significantly higher spare capacity than in the pre-pandemic period and potentially dealing with financially weaker airlines.

“This will increase their exposure to volume risk and put pressure on their aeronautical revenues, which generally represent over 50 percent of total revenues,” the analysts said. “We believe airports could ultimately face additional pressure to alleviate aeronautical charges. Many airports in the U.S. have offered airlines a deferral in rentals and other fees in the short term under the assumption that traffic levels will rebound.”

S&P Global did note the rise in cargo flights at many airports but added that revenue does not make up for the loss of passenger traffic.

The report said, “Retail revenues, the share of which have risen in recent years to 45 to 50 percent of most airports’ revenue mix, will likely be even more heavily hit than aeronautical revenues. This is not just because of the drop in passenger numbers, but also because of lower purchasing power due to the global recession, which will cut average spend per passenger.”

Focusing on airports on a global level, the report said liquidity is crucial, adding, “We expect some airports to breach covenants depending on the severity of the deterioration of financial metrics. In general, we expect debt providers to be willing to cooperate and waive covenants as long as the breaches are related only to the effects of COVID-19 rather than underlying business weakness. Nevertheless, creditors may attach more onerous requirements to accept waivers.”