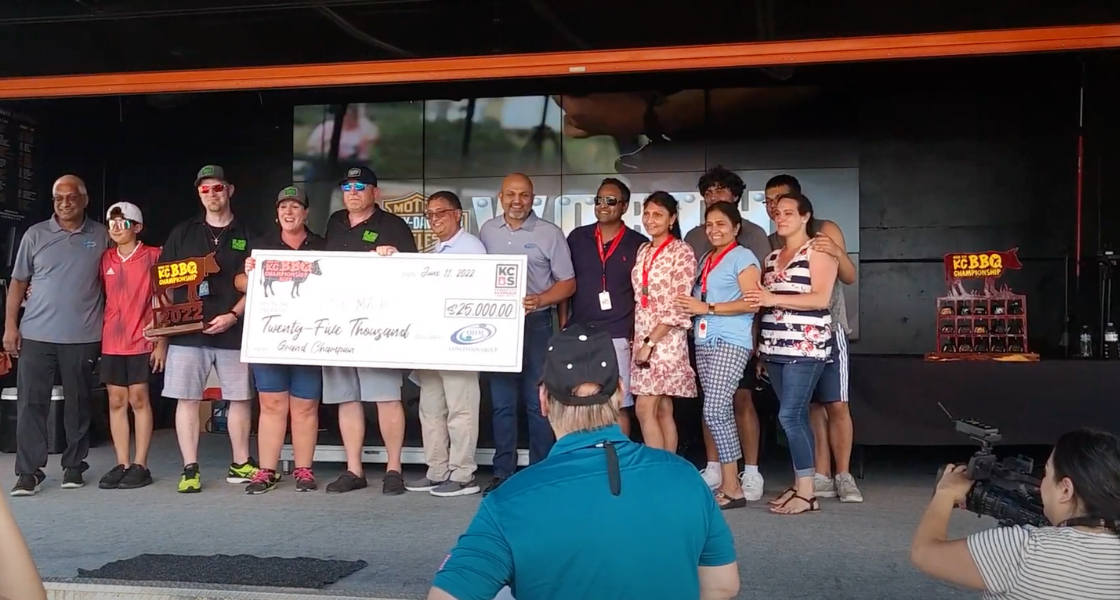 Kansas City and barbeque go together like Harley-Davidson and motorcycles. In fact, it was among rows of gleaming, new bikes and stacks of shrink-wrapped tires at the Worth Harley-Davidson in Kansas City, Mo. that 36 teams’ chicken, pork, ribs and brisket were judged to see who would win the grand prize money, the first-place trophy and, best of all, one year to showcase their food and brand at the upcoming OHM BBQ Experience Restaurant at Kansas City International Airport (MCI).

In the works for nearly two years now, the MCI BBQ Experience Restaurant, managed by OHM Group, will debut soon after the new airport opens in March 2023. Its purpose is to highlight the rich history of barbeque and the quintessential “Kansas City-style” which originated in the early 1900s and to this day continues to be a point of pride and notability for the region. 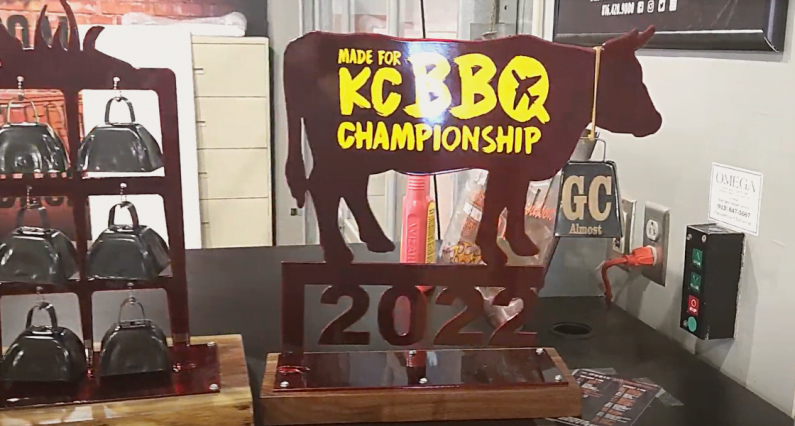 Milan Patel, president and CEO of OHM, said at the Made for KC BBQ Championship event held Saturday that the restaurant will be a first of its kind in the airport world, with plans to continue the contest and introduce a new BBQ team to the airport each year.

“We went around town and asked folks, ‘hey, what’s your favorite barbeque?’ And we got a different answer from everybody,” he said. The variety of answers and the tendency to mix and match favorite dishes from different establishments sparked the idea to represent that choice diversity literally. “We then said, how about we just bring… a competition-themed restaurant that’s ever-changing. Every year, we’ll have a new Pitmaster that will be selected by [Kansas City Barbeque Society (KCBS)] for the KCI airport location.”

Each year, said Patel, winning teams can look forward to a grand prize pot (this year a hefty $25,000), plus a percentage of royalties from one year of licensing their brand in the 8,000-square-foot restaurant. The winning team’s award-winning recipes will feature on the menu so that MCI travelers can sample the proven best of what the city has to offer.

“Everybody still thinks I’m crazy,” joked OHM EVP and business development officer Richard Chinsammy, noting that when the idea struck, he wasn’t even sure it would be possible. But with the help of partners and sponsors, as well as the know-how and expertise of the KCBS, a new option for breaking into the airport space was born. “It started because we wanted to be different. Milan and I started in Kansas City in 2018. …We know that there are a lot of ingrained restaurants in town, but we knew that this was going to be a 15-year contract and we wanted people to have an opportunity to be in the airport that normally wouldn’t, not a brand or a chain. We wanted something different.”

The contest was held with help from partners Old World Spices and the KCBS, a sanctioning body that holds and judges 400 contests around the world every year to award the coveted Pitmaster title to barbeque pros. 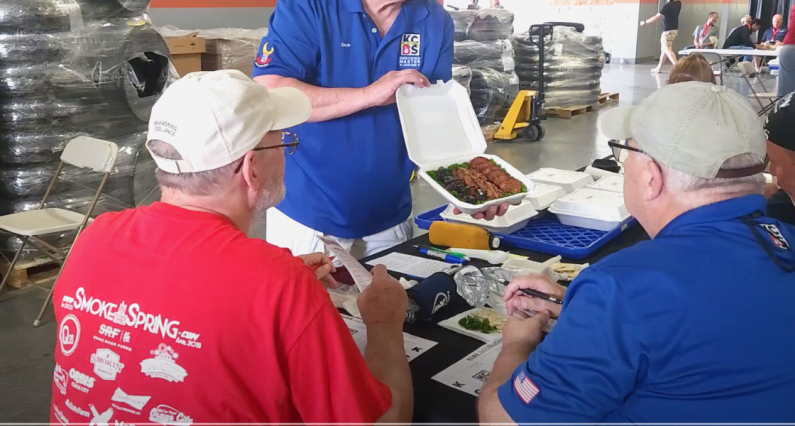 The involvement of the KCBS will tell barbeque aficionados all they need to know about the legitimacy of the contest and the cooking chops of the grand champion; as the world’s largest barbecue organization and the leading resource for tips, recipes, guides and other information all about the art of barbeque, KCBS was an obvious choice to sanction and judge the contest.

Emily Detwiler is CEO of the KCBS; she knows the ins and outs of what makes good barbeque. “The judges are judging chicken, pork ribs, pork butt and brisket,” she said at the event Saturday afternoon as large trays loaded with steaming, saucy food wound their way to the judges’ tables to be scored. “The criteria [are] appearance, taste and tenderness.

“The Table Captain will present each box for appearance first, and the judges after that will taste for taste and tenderness. They have a very regimented process in terms of what they go through, and we have a regimented scoring system that is the same at any KCBS-sanctioned contest, so it’s very consistent,” Detwiler said. “The Pitmasters know what they’re getting, the judges know what they’re doing… most of the judges here today are master certified judges, which is the next echelon of judging.”

Despite the competition, the interactions between contestants were jovial, friendly and, of course, excited. Men and women in shirts emblazoned with different team names – some teams with no uniform at all beside the splashes of sauce staining their well-worked shirts – clapped each other on the back and teased and laughed as they walked up together to submit each round of food for judging. Many, if not all, had been awake and cooking for many hours by the time they submitted their last dishes at 2:00 p.m. on Saturday.

Dave Pace, co-owner of Unfamous Dave’s, one of the day’s competing teams, has been cooking for 20 years and enjoyed competing with the KCBS and others for five. “We started at 5:30 [in the morning],” he said. Not only did the meat (brisket, in this case) have to cook for nearly six hours over a low heat, it had to rest and then face further preparation by Dave and his wife, Karen, before it was ready to be served to the judges for scoring as the last round of the day.

The competitors that day were no amateurs; in fact, most of the teams said they make a habit, if not a living, of traveling around the state and region to compete in different KCBS-run competitions.

Randy VanSlyke and his team – High i Que – were out that day in the hopes of getting their brand in the airport, noting the opportunities and connections that come with branching out.

“We heard about it through KCBS,” VanSlyke said. “We do a lot of competitions – 20 or so a year typically – so we’ve been very involved in competition barbeque for quite some time. This has a huge payout, and being able to work with the airport and the barbeque restaurant would be a pretty cool experience.”

After the briskets were turned in and the smokers were turned off, the teams cleaned up while the judges continued tasting samples of brisket and then comparing and combining scores to determine who would go home that day with a trophy and a contract. 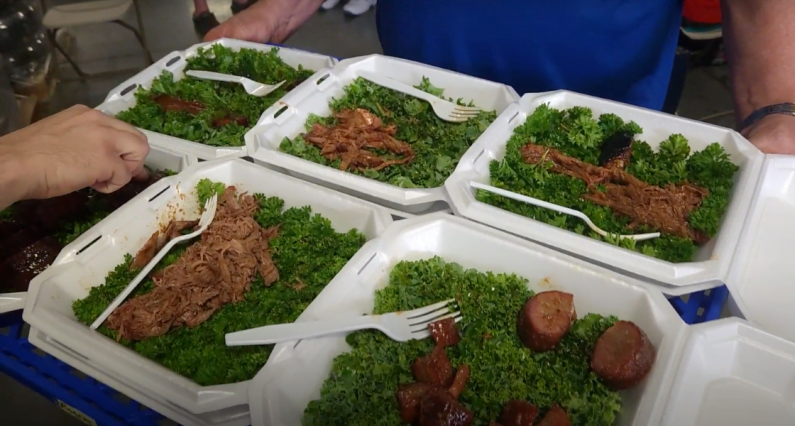 At the awards ceremony later that day, the teams packed themselves into tables and benches around the stage. The sun blazed above but was nothing compared to the heat being thrown in the form of good-natured trash talk among the competitors.

For their part, OHM’s Patel and Chinsammy wanted to ensure as many teams as possible went home with something to show for their efforts. In addition to the grand prize money and restaurant deal, cash and other prizes were awarded for the day’s best performances in individual categories (chicken, pork butt, ribs and brisket).

Many teams took the stage (and the checks) more than once. Several seemed to be well-known amongst the crowd, garnering whoops and cheers each time their team name was called.

The buzz of the crowd died down as the announcement of the final names of the day, the runners-up and the grand champion, crept closer. A tense anticipation straightened backs and craned necks, silencing children who’d previously been whining about the heat. 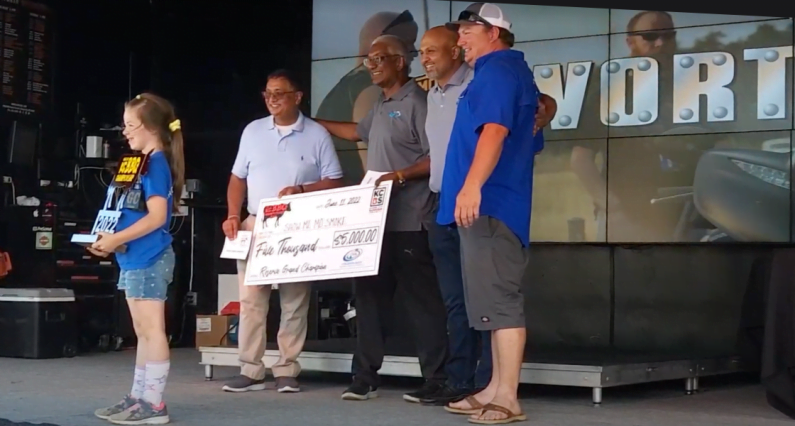 When Show Me Mo Smoke – a dad-and-daughter duo that had received several awards already that day – were called as the reserve grand champion, winning second place overall and $5,000, the applause was celebratory. However, it died down quickly as the entire crowd held its breath for the big reveal.

“The Grand Champion is Black Magic!” announced the emcee, rousing the crowd into the loudest and most emphatic cheering of the day. 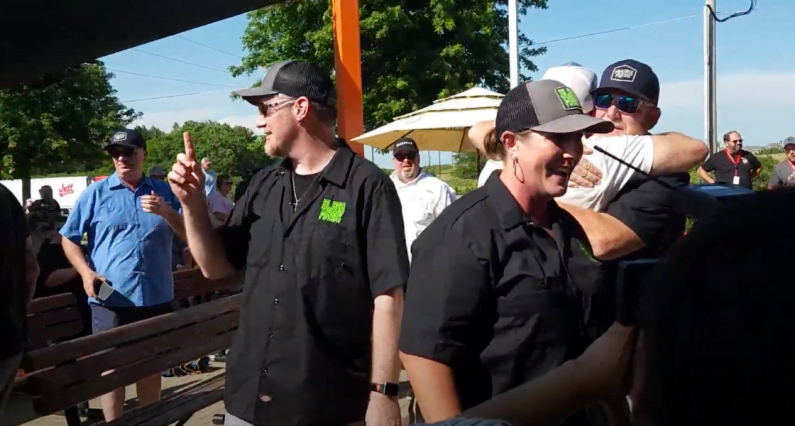 Overwhelmed with emotion, co-founder Breana Via managed to tell the crowd gathered around to congratulate her that it was their “First GC!” before making her way to the stage to claim the team’s trophy and winnings. This victory was a first for the comparatively young team, its first grand champion title since they began competing two years ago.

The OHM BBQ Experience Restaurant at MCI will feature Black Magic’s winning recipes on the menu, in addition to branding throughout the restaurant that will help travelers get to know the team that brought them that taste of Kansas City. 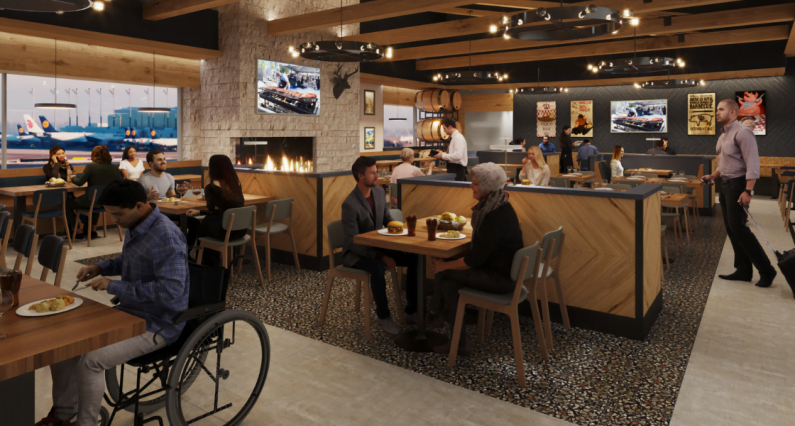