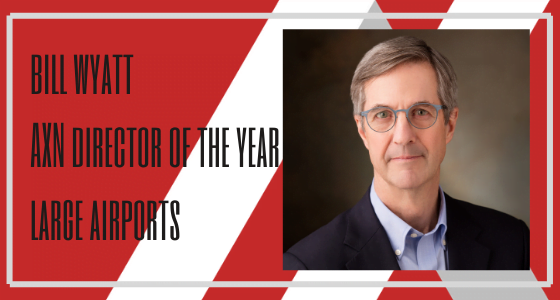 Airport Experience News has named Bill Wyatt, executive director of the Salt Lake City Department of Airports, as its 2020 Director of the Year in the large airports category.

“Bill Wyatt is overseeing the construction of a brand-new Salt Lake City International Airport (SLC) at a time when the pandemic has upended travel norms, and has taken actions that will save millions as the project enters the next phase,” says Melissa Montes, publisher of Airport Experience News. “Bill’s ability to pivot to maximize efficiency in the face of extraordinary circumstances prompted AXN to select him as its Director of the Year in the large airports division.”

Wyatt began serving at the Salt Lake City Department of Airports in November 2017. He is responsible for SLC along with two reliever airports. Previously, Wyatt spent 16 years as the executive director of the Port of Portland where he oversaw four marine terminals, two general aviation airports and Portland International Airport (PDX).

“I am grateful and humbled to be honored with such a distinguished award,” Wyatt says. “Opening The New SLC on time and on budget would not have been possible without a staff of committed and experienced professionals who, despite many challenges faced this year alone, delivered an awe-inspiring airport.”

Wyatt is the third of three directors of the year to be named by AXN for 2020. Earlier this month, AXN announced the selection of Kevin Dolliole of Louis Armstrong New Orleans International Airport (MSY) and Paul Bradbury of Portland International Jetport in Maine as Director of the Year in the medium and small airports divisions, respectively. All will be featured in the November/December issue of Airport Experience News and will be honored at the 2021 Airport Experience Conference.