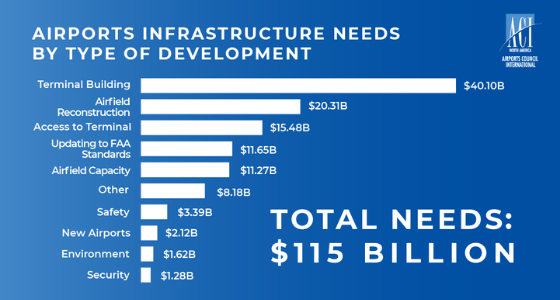 From the long-standing shortage of funding for upgrading and enlarging outdated terminals to the newer challenges of figuring out how to offer space for social distancing and other pandemic-related needs, airports are struggling more than ever with infrastructure challenges.

Several airport directors and officials from Airports Council International – North America (ACI-NA) shared their challenges and potential solutions Thursday during “Lead With Infrastructure: Building the Runway to Economic Growth,” a webinar hosted by United for Infrastructure, of which ACI-NA is an affiliate member.

The industry has not been without help during the COVID-19 pandemic. In a one-on-one interview conducted by United for Infrastructure CEO Zach Schafer, House Aviation Subcommittee Chair Rick Larsen (D-Washington), talked about the recent relief bill passed by Congress that earmarked $8 billion for airports, including $800 million for concessions.

“It is a major piece of legislation … that is timely and appropriate to the size of the problem,” Larsen said. “It’s going to bring real relief to thousands of Americans – not just shots in the arms, not just putting money into people’s pockets … not just helping our schools safely reopen – but with some of our other, important needs around infrastructure and travel industries in the United States.”

But the industry faced significant infrastructure challenges before COVID hit. And challenges associated with that and the general economic misfortune brought on by the pandemic have been felt not just by John Gleen Columbus International Airport (CMH), but by the entire region, said Joseph Nardone, president and CEO of the Columbus Regional Airport Authority, during a panel discussion led by Kevin Burke, president and CEO of ACI-NA.

“Infrastructure is critical. …We have an economic impact in this region of about $13 billion from Columbus Airports – nearly 59,000 jobs. One in every 25 jobs in central Ohio are connected to Columbus airports,” Nardone said. “We’re a pre-9/11 airport. We’re challenged – more than 60 years old in some spaces of this airport – but we need to grow, and we can’t provide the kind of airport that Central Ohio deserves … without a PFC increase, without a brand-new terminal, without the things that make the airport business so special.”

The event served as a showcase for ACI-NA to herald the publishing of the second part of its airport infrastructure needs report.

ACI-NA’s Burke stressed the shortcomings of support for airports, which were exacerbated by the outbreak of the COVID-19 pandemic. Brought to the fore though they were by the extreme and sudden loss of passenger traffic, these problems existed before the pandemic and, he said, should be taken into account when planning for the future.

“If we learned anything … it’s really been made really clear to us that good airport infrastructure is vital to addressing the challenges of today, whether they be health, safety, or economic,” Burke said. “The last year has reinforced that in order to be prepared for the challenges of tomorrow, we need world-class airport infrastructure. We’ve been arguing for that for years.”

Some airports are doing what they can while waiting for a tomorrow that sees more sustainable numbers of passengers and flights.

“There’s a lot of second-guessing now: if you’ve already designed or built something new … what do you have to do to make sure to keep employees and customers safe?” said Lew Bleiweis, executive director of the Greater Asheville Regional Airport Authority. “We can’t provide six feet of space in between, the cost of that and the size of that is just not acceptable. So how do you provide a touchless type of environment [instead]?”

But coming up with the capital for even temporary solutions is a struggle when traffic is so low. Chellie Cameron, CEO of Philadelphia International Airport (PHL), said the list of improvements and new protocols necessary to make the airport appealing to current travelers can get overwhelming.

“Just having dollars for operational requirements, and – oh, by the way, all the increased operational requirements we had to do, like health and safety adjustments, to how we did things to make our facilities safer for our passengers and our guests,” Cameron said, adding that though the last year it has been difficult to continue at times with even some basic upgrades, such as restrooms.

“We had to make some very difficult choices,” she said.

Asheville’s Bleiweis felt similarly, recounting the struggle that many smaller or older airports face in trying to stay up to date with improvements that other airports are making, such as heating, ventilation and air conditioning system upgrades that can sterilize air as it’s processed.

“Older facilities like we have here in Asheville, we don’t have a central energy plan,” he said. “We have multiple units throughout the whole terminal, so the cost of doing something like [HVAC replacement and overhaul] is prohibitive, and at the same time we don’t want to spend a lot of money upgrading our equipment and utilities when we’re, hopefully, in the next year or two tearing it all down to build something new.”

The final session of the webinar was a discussion with Lou Russo, senior vice president and national aviation practice leader for HNTB, an infrastructure design firm that services the aviation industry and several airports. Russo touted remaining optimistic and steadfast in continuing to call for more help from Congress.

When asked what he thought would help save the industry, he said “more funding,” particularly for airlines and airports to be able to recoup their daily losses.

“When you look at what the airports have lost – $40 billion, probably, since COVID, and the airlines $35 billion net, what I’d like to see is a package that’s structured without strings attached,” he said. “In other words, every airport and airline have different needs. One size doesn’t quite fit all.”